Yesterday I received two boxes of PrimaDéli’s new Pandan Kaya with Gula Melaka Roll to try. As you know, PrimaDéli is Singapore’s first home-grown bakery franchise with over 40 halal-certified outlets all over Singapore.

It’s just so, so kind of these folks to send me two rolls instead of one. 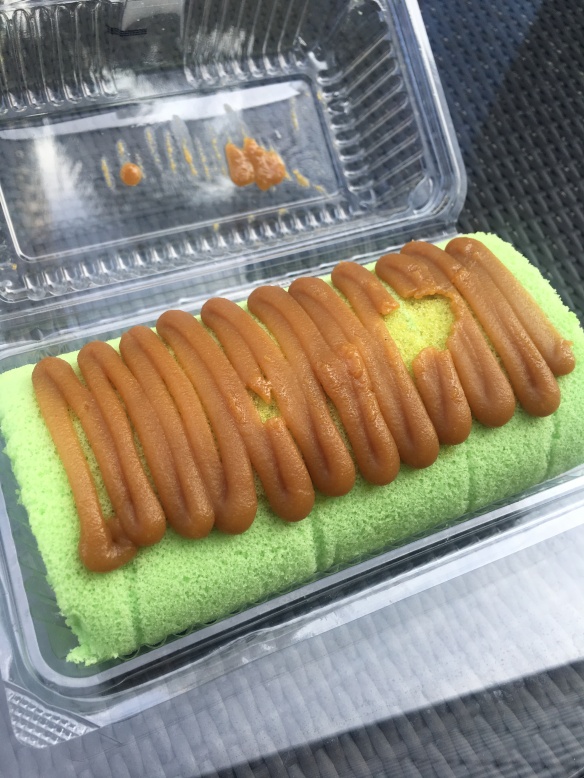 OK ignore the empty patches where the gula melaka got stuck to the plastic lid cover, but look at the richness of the drizzle and look at how soft the sponge cake lookssssss UNFFFF

The Pandan Kaya with Gula Melaka roll is a collaboration with celebrity chef Siti Mastura Alwi, a specialist in local-flavoured dishes and desserts.

Chef Siti the brains behind this new roll! Apart from heading the SSA Culinary Institute as their Principle Consultant, she also runs her own firm Siti’s Delights 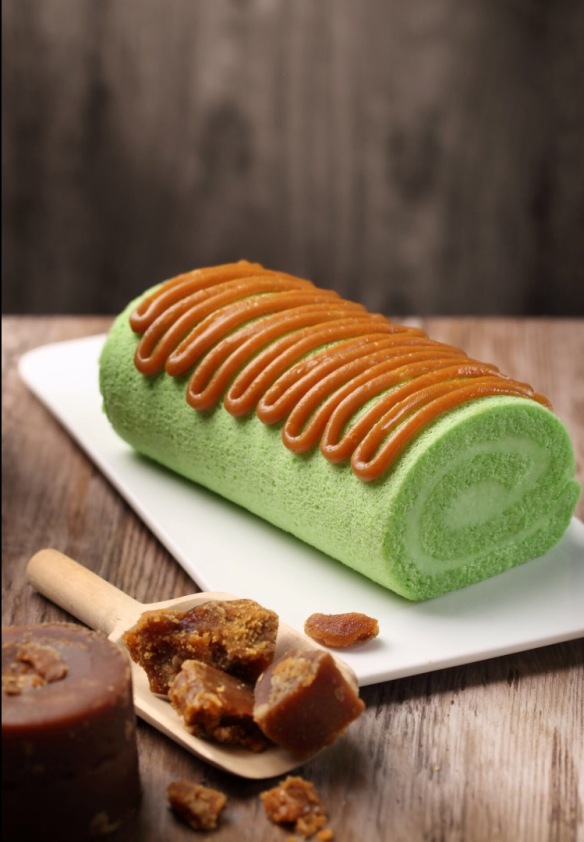 Look at this disgustingly beautiful photo I got from the PrimaDéli PR team. Why are all my photos so awful and not at all like this haha

I felt pretty undeserving of those rolls that PrimaDéli wanted me to taste, like oh shizz maybe PrimaDéli made a mistake and meant to send it to some OTHER food blogger what do I do what do I do but anyway NEVER MIND if I eat it quick enough they can’t do anything to reverse it.

So the moment they delivered it to my office (contrary to popular perception I am employed and don’t just sit around all day at home in my jammies waiting for cakes to drop out of the sky, although that is a lifegoal.) I cut one roll into 7 slices and shared it with my colleagues. That’s right, share the calories and crowdsource the reviews.

Pretty pleased with myself

I took two slices for myself because I mean they’re mine so no one could object, and also I was just being greedy.

My verdict? YUM it’s really good! The gula melaka drizzle at the top is SO delicious!! On its own it can be too sweet but the subtle pandan kaya flavour from the sponge cake helps to balance it out. The sponge cake, by the way, is so moist and fluffy!! Everyone who tried it asked me where it was from and were very impressed with PrimaDéli’s latest creation.

Two of my colleagues said it was a little on the sweet side, and alright full disclosure I admit I do have a sweet tooth, so I loved it. But also you can’t have gula melaka and not have it be sweet?? And also one of the two colleagues literally bit off only the top layer of the roll (where all the gula melaka was. CASSANDRA FOR THE LOVE OF GOD YOU HAVE TO RATION IT OUT WITH EVERY BITE.) So apart from the 2 comments of the roll being a little sweet, overall the cake scored very well among us.

I must admit I have not bought anything from PrimaDéli for a few years now, but I will definitely buy a roll or two every now and then for house visits and to serve to guests at home. 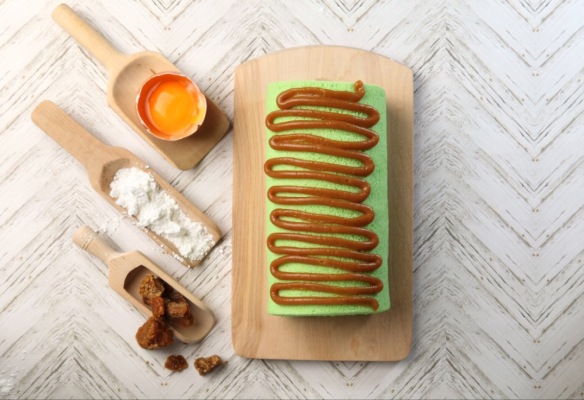 How delightful is this photo also!! I love it. Could never ever come close lol

The Pandan Kaya with Gula Melaka Roll is going for an introductory price of S$4.80 per roll from now till 31 Mar 2017, after which it will go for S$6 per roll. Still basically cheap as chips, you guys (literally like Kettle Chips are S$5?).

GUYSSSSS there is now a halal version of Fat Boy’s burger and it’s called Fat Papas Burgers and Shakes!!! We have the legendary Sheikh Haikel, rapper and radio extraordinare, to thank for this. When I was there this past Thursday, Haikel (lol like he’s my BFF) told me that he had waited 7 years for this dream to be realised. He first floated the idea to Fat Boy’s Burger co-founder Bernie Tay shortly after Bernie and his brother Kennie opened their very first Fat Boy’s outlet in 2009. However, the brothers wanted to focus on building their brand and felt the time wasn’t right.

After 7 years though, Sheikh Haikel got their blessing to co-found the halal offshoot called Fat Papas, and so here I am to tell you how my first try went!

Fat Papas is located on Bali Lane, pretty near where Blu Jaz Cafe is. I LOVE this location obviously because there is just so, so many halal options in the area from Krave to Hyde & Co to Kampong Glam Cafe, I just keep coming back.

The burger joint is on 2 floors – the ground floor seats about 10 pax, and the upstairs fits just over 20 I believe, so try to make reservations when you can! When I came for dinner, Fat Papas was in its soft launch phase and already the upstairs was full, so I got a table on the ground floor. 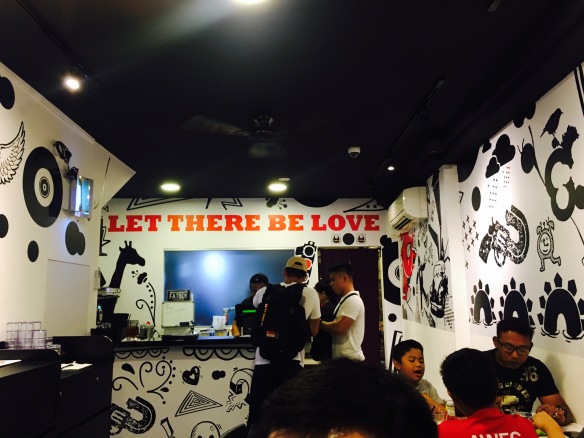 This is the ground floor that seats about 10 pax. Same black-white-red colour scheme as Fat Boy’s, same black doodles on the white walls!

Being on the ground floor was a little stressful because Bernie Tay, Sheikh Haikel, and Anna Belle Francis were all there! I’m like a huge fangirl of Sheikh Haikel – literally, I bought a copy of his album For Sure back in 2002 when I still bought CDs because I really liked his single Witulah. Who can forget the amazing line “to keep me strong lah I say bismillah“? Rap genius. As for Anna Belle Francis, my friend A and I first saw her back when we were loser teens (I think we were in a Starbucks or McDonald’s or something), and she was just so beautiful we asked for her autograph on my friend’s copy of the book The Color Purple by Alice Walker lol. The two of them are so goals ❤

That froooooooo and CD art 100%

Aaaanyway my dinner date came super late and I spent like 15 agonizing minutes trying not to freak out about being so close to the dream couple, but every story has a happy ending. More on this later. For now, here’s a look at the menu (which you can also find online here):

I can’t deal with The Elvis?! And I gots to try that Country Fried Steak sometime. 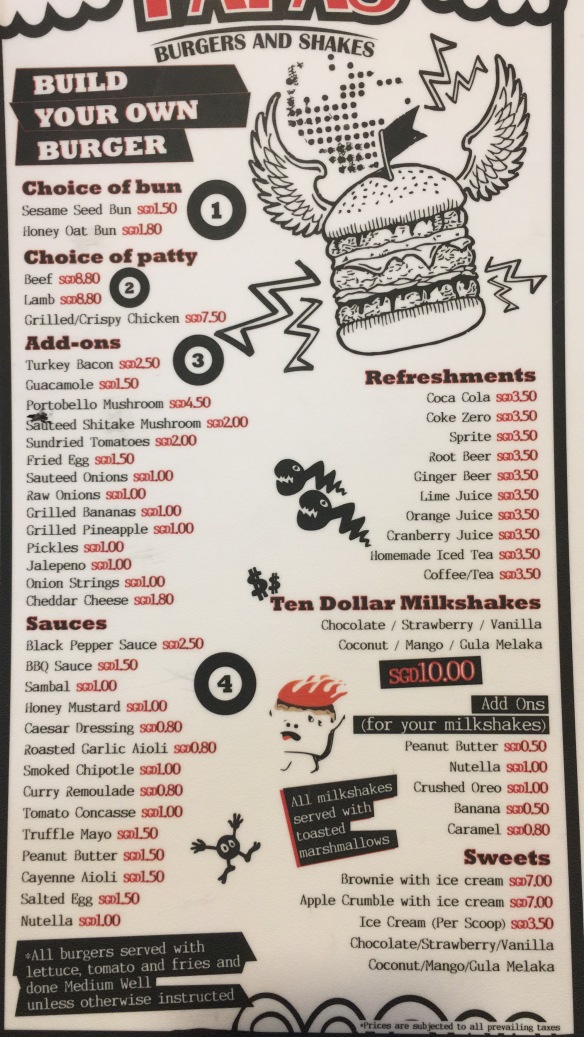 I’m too chicken to build my own burger for now. Also, patiently waiting for more types of cheeses to be introduced into the menu!

I ordered the beef version of the Wimpy Burger (S$15), which features the house blend beef patty, turkey bacon, melted aged cheddar cheese and bbq sauce on a sesame bun:

At first bite (which was a struggle by the way because the burger was HUGE and my mouth is an appropriately-sized mouth), I knew this was a winner and I was going to keep coming back for more. Just look at it!!

The patty itself had the perfect texture and bite – the ground meat didn’t fall apart too easily, but it wasn’t also just like one processed chunk of meat. I could def taste the quality. The patty itself was subtly flavoured (in a good way), while the turkey bacon rounded it out with a more salty taste. The cheese and the BBQ sauce meant that every bite of the burger was super juicy and satisfying! It was like a Ramly Burger but a thousand times better and a little less greasy. 9.5/10

I think there was some teething issues in the kitchen so my burger came with an egg in it – I still ate it anyway because rezeki jangan ditolak, but I think I would def have preferred it without the egg, meaning the Wimpy in its original incarnation. I can’t wait to go back and try all the other things in the menu!!

At the end of our meal, while my friend was paying, Sheikh Haikel came up and thanked me for coming, and that’s when he told me this was his dream 7 years in the making. Anna Belle came and joined us (looking SO lovely in her hijab. GOALS I TELL YA) and I gushed like a silly fangirl and made a spectacular fool of myself lol. I love them though, they spent some time chatting with me and all the other patrons – what a warm and genuine couple ugh!!! Please go and try Fat Papas stat, you will not regret it. Make a reservation though, or you might have to wait for a table! Still worth it anyway. 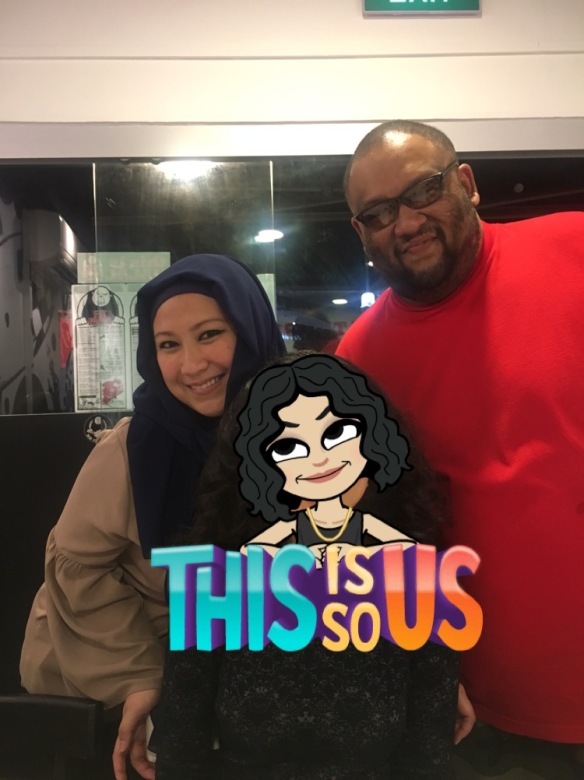 Here is my precious #dreamsdocometrue photo with the happy couple. Sorry you have to put up with my Bitmoji covering my actual face but I really do look like that in real life.