For the past year or so, I’d been absolutely dying to try I AM Cafe, since it’s probably one of the only hipster cafes in the area that I hadn’t previously tried. Whenever I walked past it on Saturdays the lines would always be prohibitively long, so I would – rather spitefully – tell my sinking heart “well, it’s not air-conditioned anyway“. 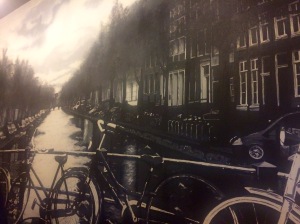 We’re in Amsterdam! – OK no, this is a wallpaper at I Am…

I came here with my cousin on a hoppin’ Friday night and waited about 30 minutes for a table. The cafe does not accept reservations, which is understandable, but always annoying. That being said, I think it acts as a discreet filter to screen out certain types of diners, e.g. those who don’t really care about food. Yes, those eat-to-live types who proudly proclaim ‘I’ll never line up for food’. Nothing wrong with that, but I sure would love to eat in the company of people who love eating, that’s all. It makes for a very cheerful crowd.

My cousin and I both got the Charcoal Grilled ‘Sloppy’ Beef Burger (S$14.90).

The burger tasted delicious, but I wish there’d been more of the messy sauce. Whatever little they coated the patty with was really yummy and meaty, so I was quite sad there was so little of it – now I get why they put quotes around ‘sloppy’ 😦 All cheekiness aside, I think the sauce is spot on and the patty really quite tender. The patty also didn’t come entirely apart like the ones from The Lab. I did however wish it were just slightly juicier; it felt a little dry towards the end. 8/10

The fries deserve their own paragraph. These were great!! These bad-boys still had their skin on so you can tell they’re legit. I am usually in favour of fries that are rather crispy on the outside, but while these weren’t terribly crispy, they did taste DAMN good. I was very impressed. 9/10

We also shared the I Am…The Platters (S$18.90) since we wanted to be able to try more things from the menu. The platter came with 4 hot wings, 3 mussels, a whole soft shell crab cut into two, some squid, and 4 prawns. 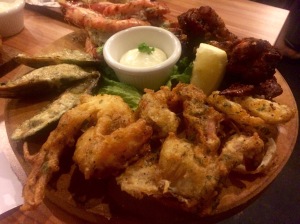 My verdict for each component:

Chicken wings: Yum, my favourite of the platter. The wings were savoury with a subtle hint of spice, and did not taste too oily. I did however expect them to be a little spicier (c.f. the hot wings from The Lab, which were really quite garang , or fierce). 8/10

Baked Mussels: The mussels themselves did not taste too fresh/plump/juicy, and the paste on top of it was pretty bland. That being said, I love mussels so it was like “Eh, I’ll it eat, what the hey…” 7/10

Soft-shell crab: A little bland and oily, but the portion was generous and there was quite a bit of crab meat. Yum. 7.5/10

Calamari: Not very memorable, though ironically I remember not being impressed. 5/10

Prawns: These were described in the menu as baked garlic butter jumbo juicy prawns, which is quite a tall order. They were pretty yummy, as grilled prawns are wont to be, but I found them a little dessicated and not as plump/fresh as I would’ve liked. The baked garlic butter was average and didn’t really add too much to the prawns. 8/10

For drinks I got the Iced Chocolate (S$5.50) which came in a mason jar (so hipster) topped off with a floating fat piece of marshmallow. My cousin got the Honey With Lemon (S$3.50) which came on a saucer roughly the size of a UFO.

I’m not a huge fan of marshmallows unless they’re melted (like in smores or in baked pie-type recipes), but the chocolate drink itself was great. It wasn’t too sweet and had a slightly bitter note, which prevented it from being too cloying. 9/10

Service was surprisingly chipper for a Friday night, despite the full house. I think I would do well to come back and try their famed Fish ‘N’ Chips (S$15.90) soon. Will definitely review that once I’m done! Overall I Am.. seems like the hip spot to be at with your friends (it’s small, cramped, and water is self-service so it’s not the family-friendliest of places) for a fun night out. The ambience is great and abuzz with energy – there’s an open kitchen where they charcoal-grill half their menu, and you can see the cooks being all jocose and hipster. The downside of this is that if you sit close to the kitchen area, you WILL leave the place smelling like charcoal 😦 Still, small price to pay for relatively decent food with great heart and a great ambience!